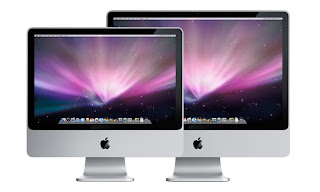 Speculation about the chips used in the new iMac have been rampant and many believed that Apple got special treatment and received the next generation Montevina chips that have 1066MHz front side bus and speeds up to 3.06GHz. The reason for this speculation was that present generation Penryn chips have 800MHz front side bus and processor speed range from 2.0GHz to 2.8GHz. Well Apple did get special treatment in form of special made 45nm Penryn. Read More
Posted by GG at 11:58 PM