Apple today launched the new iPhone 3G S and the initial data from various industrial sources indicate that the new iPhone launch will be an even bigger success than last year’s iPhone 3G launch. The two major iPhone carriers O2 in UK and AT&T in US have already announced that they are seeing much more than expected demand for the new phone.
O2 said that by lunchtime they had sold more iPhone 3G S than they sold iPhone 3G devices on the launch day last year. O2 added sales are still going strong and we expect to sell 50 percent more iPhone 3G S by close of business today than we sold on iPhone 3G launch last year. O2 also reported that their in store traffic is 10 times higher and their online site traffic is 150 percent higher than usual business day.
In US, AT&T’s CEO announced “AT&T sold hundreds of thousands of iPhone 3G S in pre-order process prior to the launch, which exceeded our own expectations for iPhone 3G S.” Along with AT&T, Apple has also been taking pre-orders for the new iPhone in US, and it is very likely that they will also have similar numbers or maybe even higher.
Last year, on the iPhone 3G launch weekend, AT&T and Apple sold somewhere in between 400,000 to 500,000 iPhones. And it looks like this year they will cross the number in pre-orders only. Now the question is will Apple cross one million mark in less than 24 hours for iPhone 3G S.
[From TechzTalk.com]
Posted by GG at 2:11 PM No comments: 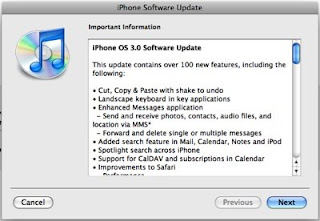 As announced at WWDC on June 8th, Apple has released the iPhone OS 3.0 software update for current iPhone owners. According to the release note the update contains over 100 new features, including the following: Read More
Posted by GG at 1:55 PM No comments: