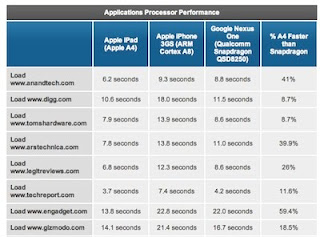 AnandTech ran comparative benchmarks on iPad, iPhone 3GS and Nexus One to see how Apple’s new A4 SoC stacks up against the Samsung chip in iPhone and Qualcomm Snapdragon QSD8250 chip in Nexus One. The Snapdragon will also be used in many tablets coming later this year, so this comparison should give an idea of what we can expect performance-wise from those tablets. AnandTech ran two tests, in the first test they recorded load time for various websites and in the second test they used WebKit SunSpider JavaScript Benchmark tool.
Read More
Posted by GG at 2:27 PM