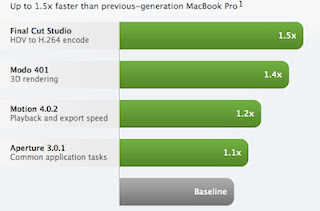 Before MacBook Pros were announced it was rumored that Apple will use NVIDIA’s new Optimus technology for automatic switching between Intel’s integrated graphics and NVIDIA discrete graphics chip. However, recent findings by AppleInsider indicate that even though the concept used by Apple is similar to NVIDIA Optimus, the automatic graphics switching solution has been completely developed by Apple. NVIDIA’s spokesperson also confirmed that the company had no input on Apple’s solution.
Read More
Posted by GG at 11:27 AM