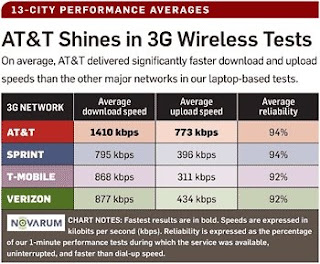 Last year, PC World tested 3G services in 13 major cities in US. They concluded that Verizon 3G service was fast and reliable, whereas AT&T 3G service was fast in some cities but reliability was an issue. PC World has again done the same test in 13 cities and now they say that AT&T’s 3G network is now the top performer in 13-city test, with download speeds 67 percent faster than its competitors.
Read More
Posted by GG at 7:42 PM