Buyers Lineup to Get The New iPad in Japan, Australia and UK 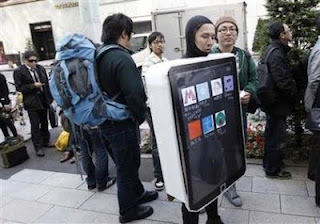 Apple today launched iPad in nine additional countries and like US launch in April, people have lineup outside Apple Stores to get their hands on the new iPad in Japan Australia and UK. Japan got the iPad first and there were over 1,200 buyers waiting in queue outside Apple Store in Ginza, Tokyo, for 8 AM launch. Buyers also lined-up outside Softbank store - who have exclusive partnership with Apple for iPad launch.
Read More
Posted by GG at 6:08 AM