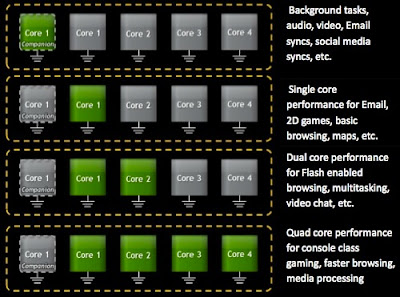 NVIDIA has released two whitepapers titled “The Benefits of Quad Core CPUs in Mobile Devices” and “Variable SMP – A Multi-Core CPU Architecture for Low Power and High Performance”. In the first whitepaper NVIDIA talks about the same old benefits of quad-core processor and how quad-core Kal-El uses less power than dual-core processors while doubling performance across the board, as you can see in the video below. However, it’s the second whitepaper where NVIDIA reveals interesting new details about Kal-El architecture, which now has a fifth “companion core”.