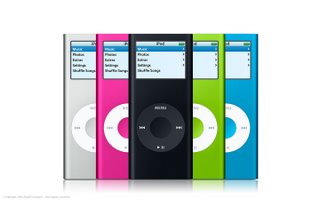 Apple has released the 2G iPod Nano made of aluminum. The new Nano comes in five colors silver, blue, green, pink and you guessed it right black. There are three models 2 Gb for $149 (silver only), 4GB for $199 (all colors except Black) and 8GB (black only). We know your question is 8GB in black only....? Yes 8GB is available in black color only, the logical thing would have been to offer 8GB in all five colors because we want a blue 8GB and girls all over the world want a Pink 8GB Nano. The best thing that Apple has done is give Nano a new case and that is made of anodized aluminum which is scratch resistant, Plus now the Capacity and prices match's other Mp3 players and still it is the sexist looking player on the market. The surprise was that Apple was able to make it Thinner and increase the battery life to 24 hours. The screen is now 40% brighter. Apple has added new software feature like Instant Search, Quick Scroll and Gapless playback you can find the description of this feature in our previous post on new 5G ipod. Apple has also designed new Headphone which they will include with the new iPod Nano. Apple says that the new headphone are better sounding and more comfortable in your ears the previous headphones. iPod Nano definitely looks better then other Mp3 player and its cost is also competitive to other Mp3 player on market.
Posted by GG at 9:07 AM