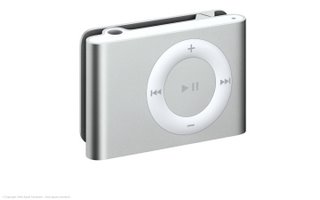 Apple also released Second generation of iPod shuffle, the new iPod shuffle is also made of anodized aluminum and has a build-in clip. Apple says its the smallest Mp3 player in the world and it measures 1.07" x 1.62" x 0.41" and weighs only 0.55oz. It comes in one model that is 1GB in capacity and silver in color. In Steve's own words " It's really beautiful". Shuffle has 12 hours of battery life and comes with a dock that connects Shuffle to your computer for charging and song transfer. Shuffle also comes with the new headphone like its big brothers iPod and iPod nano.
Posted by GG at 9:29 AM