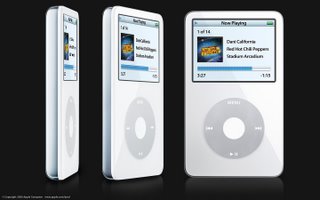 Apple introduced the updated 5G iPod, Apple reduced the cost of the 30GB model to $249 and introduced a 80GB model for $349. Apple has improved the brightness of the screen by 60%, added Search, Quick scroll and new games for download from iTunes Music store for $4.99. The battery life of 30GB iPod is now 14 hours for music and 3.5 hours for video, for 60GB its 20 hours for Music and 6.5 hours for video that is 75% increase in battery life. The size remains the same for the iPods and other specification are also same like the screen resolution and size plus audio and video format it supports. So basically Apple has added new feature to the iPod like Gapless playback where the music that was suppose to flow from one track to the second one won,t have gap between them, second software feature is Search where you can type in the song name using the click wheel and find the song you want, third new feature is Quick scroll, you see the letter while you are scrolling fast so that you get an idea where you are in the playlist and can scroll faster and the last feature is downloadable games for you iPod.
Posted by GG at 7:13 AM